The Gulfport Police Department provides traditional police services to the citizens of Gulfport, MS. The Gulf Coast Beaches, Casino Gaming, Fishing, Golf, The University of Southern Mississippi, William Carey College, and the Mississippi Gulf Coast Community College are just some of the area attractions. Sitting on the Mississippi Gulf Coast, the Gulfport Police Department has 167 sworn personnel and 57 civilian staff to serve a residential population of 71,750 and a daily population of over 144,000.

We will be a resource to the community for the education, safety, and welfare of all people. We are committed to the prevention of crime and the preservation of peace. We will honor that pledge through respect for human dignity and a strong ethical code as custodians of law and order. 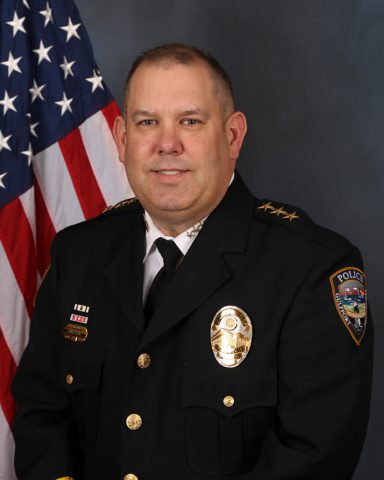 Chief Chris Ryle is a 1989 graduate of St. John’s High School and is a lifelong resident of Gulfport, MS. Upon completion of high school, he joined the United States Navy where he served until 1993 receiving an Honorable Discharge.  On January 04, 1998, Chris was hired by the Gulfport Police Department and attended the Harrison County Law Enforcement Academy.  Upon completion of the academy, he was assigned to the Patrol Division.  In October 1999 Chris was assigned as a collateral duty to the Gulfport Police Department’s Special Weapons and Tactics team as an entry team member.  In January 2001, Chris was assigned to the Pro-Active Unit until June of that same year where he returned to the Patrol Division as a Field Training Officer. In February 2003, Chris was assigned to the Criminal Investigation Division as a Detective.  In December 2007, he was promoted to the rank of Detective Sergeant and held that position until January 2011, when he was promoted to Detective Lieutenant as the Officer-in-Charge of the Forensic Unit.  In October 2011, Chris was transferred back to the Criminal Investigation’s Division as the Officer-in-Charge of District Two.  In August 2012, Detective Lieutenant Ryle attended the 128th Administrative Officers Course of the Southern Police Institute at the University of Louisville.  In January 2013, Chris was temporarily assigned as the Officer-in-Charge of the Professional Standards Unit until May 2013 where it became a permanent assignment.  In March 2013, he was promoted to the rank of Captain and was the Officer-in-Charge of the newly formed Professional Standards Bureau which includes Internal Affairs, background investigations, training, accreditation, and policy.  In October 2016 he was appointed to the rank of Commander by Chief Leonard Papania. In January 2018 Chris was assigned Commander of the Operations Bureau. 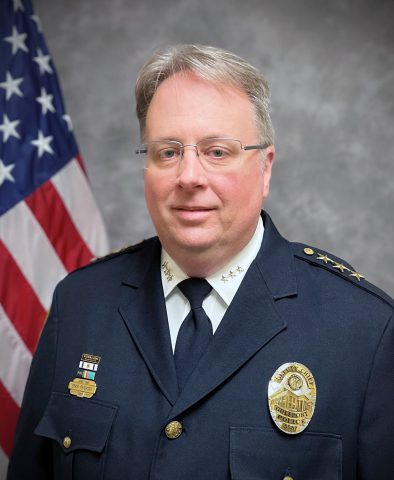 On January 1, 2018, Deputy Chief Petersen was appointed to the Command Staff  with the rank of Deputy Commander in the Support Services Bureau. On February 1, 2019, Deputy Chief Petersen was promoted to the rank of Commander of the Professional Standards Bureau, which is responsible for internal affairs investigations, background investigations, hiring, training, and agency accreditation. On September 1, 2020, he was appointed as the Deputy Chief of Police where he currently serves today.

Deputy Chief Petersen attended Mississippi Gulf Coast Community College and transferred to  the University of Southern Mississippi where he earned a Bachelor’s Degree in Business Administration in 1992.  He earned a Master’s Degree from Delta State University in Social Justice and Criminology in 2009.

Deputy Chief Petersen has also been employed as an Adjunct Faculty Member at Mississippi Gulf Coast Community College and William Carey University, where he has served as an instructor in Criminal Justice Courses.

Deputy Chief  Petersen has also been involved in his local community as a volunteer coach in youth sports including football, baseball, and basketball and served as the President of the Lyman Youth Association and Vice President of the Mississippi Gulf Coast Youth Football League. 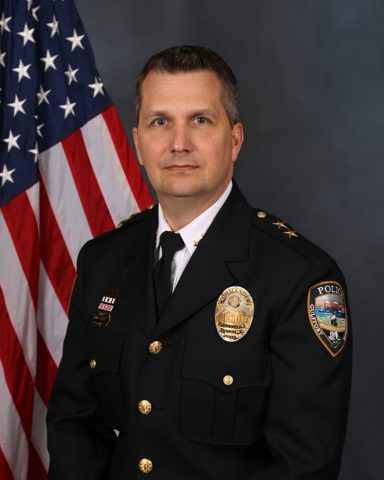 Commander Adam Cooper is a 1989 Graduate of Gulfport High School. He graduated from the University of Southern Mississippi earning a Bachelor of Science in Criminal Justice with a Minor in Forensic Science.  Adam Cooper was hired by the Gulfport Police Department in 1995 as a Community Service Technician and then hired as a full time patrol officer in 1996.  He then attended and graduated the Harrison County Law Enforcement Training Academy at the University of Southern Mississippi in 1997.  In 2000, he was assigned to the Criminal Investigations Division with the rank of Detective.  In 2005, Adam Cooper was promoted to Detective Sergeant assigned to the Criminal Investigations Division.  In 2010, he was promoted to Detective Lieutenant and Officer in Charge of the Criminal Investigation Division for the first District.  In 2011, Adam Cooper attended and graduated from the Southern Police Institute’s Police Executive Leadership Graduate Program at the University of Louisville.  In 2015, he was promoted to the rank of Captain and made the Officer in Charge of Special Enforcement Division of the Gulfport Police Department.  Adam Cooper has also had numerous other collateral duty assignments during his tenure at the Gulfport Police Department. In January 2018, Adam Cooper was appointed to Deputy Commander and assigned to the Operations Bureau. In December 2018, Adam Cooper was appointed as Commander of the Operations Bureau. 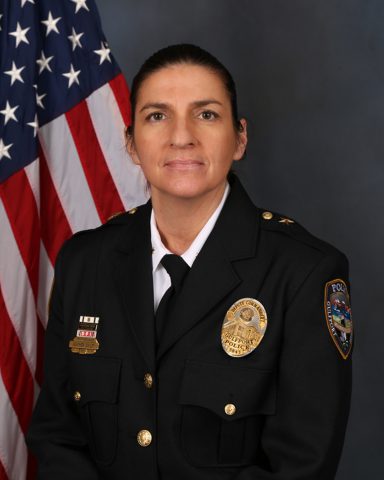 Dailey’s career path began with Gulfport PD in 1998 as an undercover officer before moving to the Patrol Division where she subsequently was assigned to Criminal Investigations Division as a Detective in 2000. Dailey promoted to the rank of Detective Sergeant in 2007 and later was assigned to the Professional Standards Unit to which she was promoted to Lieutenant as the Officer in Charge of the unit in 2010. Continuing to excel in her career, she was assigned to the Support Bureau as Officer in Charge of Administrative Services in October of 2013. As Dailey continued to achieve success, she promoted to the rank of Captain in 2019 and was appointed as Deputy Commander of the Support Bureau. In September of 2020, she was appointed Commander of Support Services.

Commander Heather Dailey’s career can be highlighted with her rise through ranks, her extensive expertise with investigations, human resources, recruiting, budget preparation, grant management, and community relations, and cap stoning her career by becoming the first female commander in the Gulfport Police Department.

She is a graduate of Collins High School and earned her Bachelor of Science degree from the University of Southern Mississippi with a major in Criminal Justice and a minor in Spanish and Counseling Psychology. Commander Dailey is also a graduate of the Southern Police Institute’s Police Executive Leadership Graduate Program at the University of Louisville. 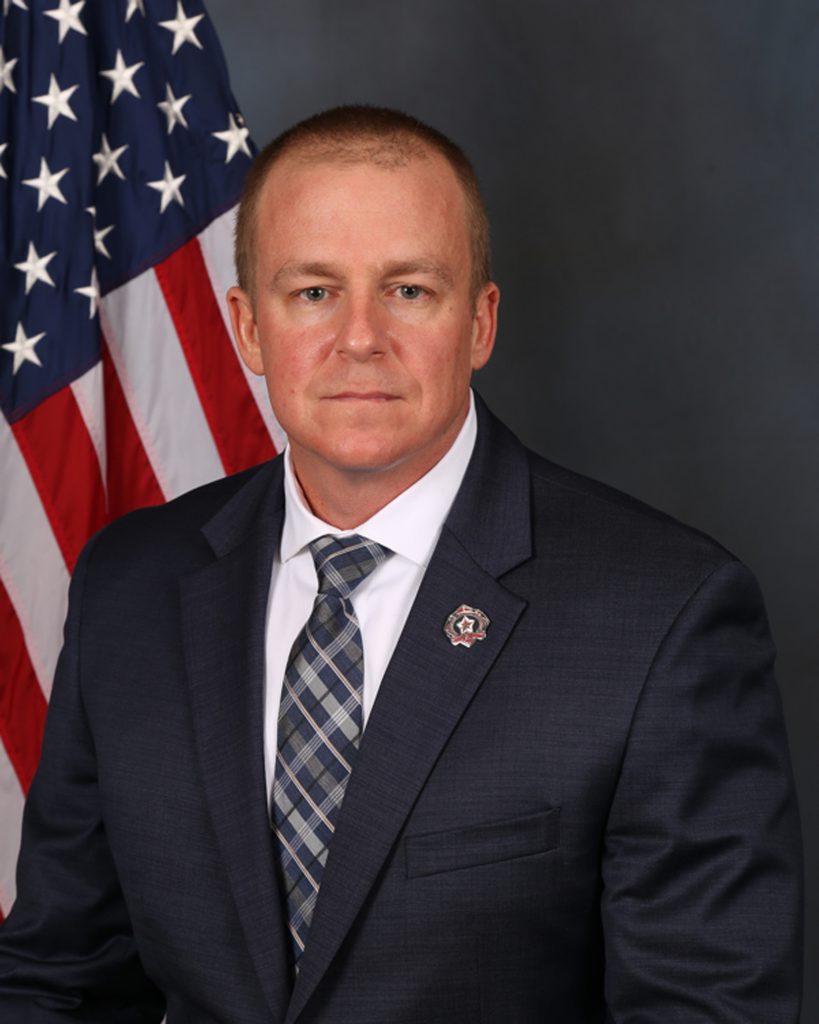 Deputy Commander Tommy Payne graduated from Biloxi High School in 1994. Payne began his career at the Gulfport Police Department in August of 2000 and graduated from the Harrison County Law Enforcement Training Academy in March of 2001. Payne served nearly fifteen years in the Patrol Division where he was promoted to Sergeant in 2007. He held collateral duties of Field Training Officer and Field

Training Officer Supervisor during his time in patrol. Payne was assigned to the Professional Standards Bureau as an Internal Affairs Detective Sergeant in 2015 where he served for four years. In February 2018, Detective Sergeant Payne attended the 139th Administrative Officers Course of the Southern Police Institute at the University of Louisville where he was recognized as a Dean Scholar and elected to serve as a class officer serving as the Sergeant at Arms. In April of 2019, Payne was promoted to the rank of Lieutenant in the Support Bureau where he was the Officer in Charge of the Communication Division, Records and Police Clerks, and Warrants Division. He held collateral duties of Emergency Operations Coordinator for the City of Gulfport as well as PT instructor. In September 2020, Payne was appointed to the rank of Deputy Commander in the Support Bureau. In March 2021, Payne was appointed to the rank of Commander of the Professional Standards Bureau. 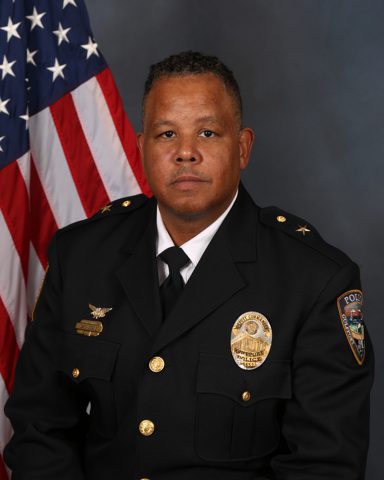 Deputy Commander Corrie has over 25 years of military service which includes active duty service, five deployments, and two presidential inaugurations. He has been awarded both the Bronze Star and the Mississippi Magnolia Medal.  Deputy Commander Corrie still serves in the Mississippi Army National Guard at Camp Shelby’s Provost Marshall’s Office. 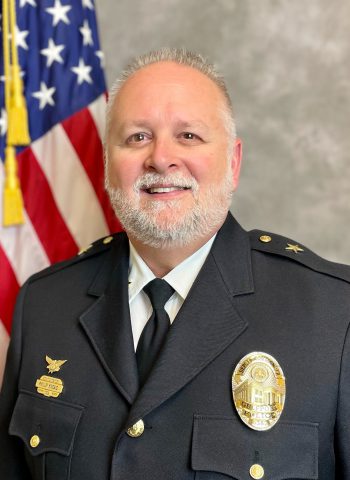 Deputy Commander Phillip Kincaid is a 1982 graduate of Southern High School in Racine, Ohio. Upon completion of high school, he joined the United States Navy Seabees where he was stationed in Gulfport, MS. Phillip served in the Navy for 20 years with distinction before retiring honorably in 2002 as a Navy Chief Petty Officer. Phillip first joined the Gulfport Police Department in September 1999 as a reserve police officer. He served in this capacity until March 2002 when he was hired as a full time police officer in the Operations Bureau. In July 2003, he became a field training officer. In February 2007, he was promoted to Sergeant. That same year, Phillip was assigned as one of the departments Crisis Negotiator’s on the department’s SWAT Team. In December 2010, Phillip was promoted to Lieutenant where he created the Special Events Division before eventually assuming command of both the Reserve Program and Traffic Division. Phillip changed duty assignments in May 2015 where he assumed duties as 2nd in command of the Professional Standards Bureau and was responsible for overseeing training, policy and planning and, serving as the department’s Accreditation Manager. In late 2015, Phillip attended and graduated from the Southern Police Institute 134th Administrative Officers Course in Louisville, Kentucky and received the B. Edward Campbell Service Award. In January 2018, Phillip moved to the Support Bureau where he was appointed as the Officer-in-charge of Data Management and oversaw the day to day operations of both Dispatch and Records personnel. In December 2018, Phillip was promoted to the rank of Captain and reassigned to the Operations Bureau as the Officer-in-charge of the Special Events Division, Traffic Division and the departments Reserve Program. On January 1, 2020 Captain Kincaid was assigned as the Officer in Charge of Uniformed Services for the Gulfport Police Department. In March 2021, Kincaid was promoted to the rank of Deputy Commander and assigned to the Operations Bureau. 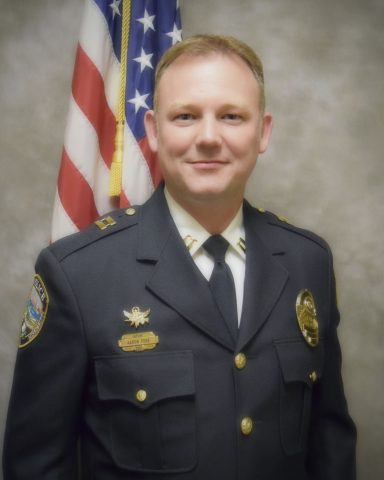 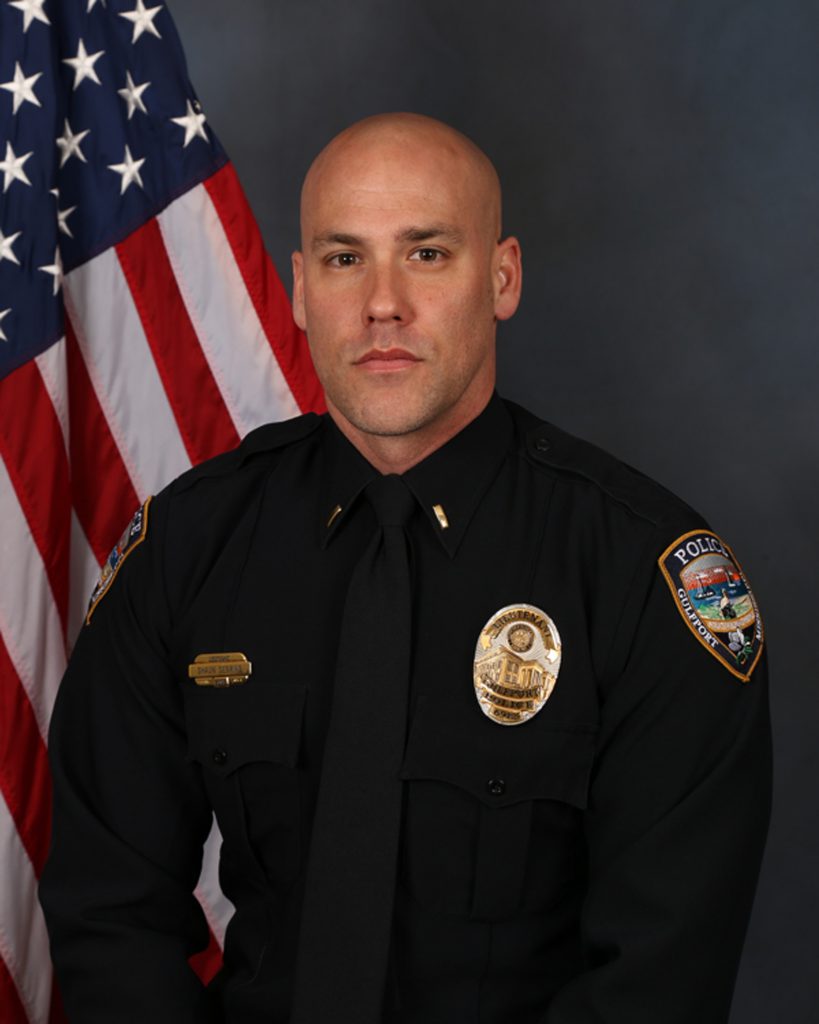 Captain Shaun Sebring began his career as a Police Officer in the Patrol Division in December of 2005 with the city on the heels of Hurricane Katrina. Sebring graduated from the Law Enforcement Training Academy in June of 2006. In December of 2009, Sebring attended the Southern Regional Public Safety Institute (SRPSI) and became a certified Field Training Officer. Sebring was assigned to the Criminal Investigations Division from 2010 to 2012. In the summer of 2015, Sebring was promoted to the rank of Sergeant overseeing various patrol shifts and a violent crime unit. Sebring held that position until he was promoted to the rank of Lieutenant in the Patrol Division in March of 2018. On November 2, 2020, Sebring was promoted to Captain of Special Events. Sebring is also a graduate of the Mississippi Regional Command College at the University of Mississippi in Oxford, MS. In June of 2020 Sebring was assigned as the Officer in Charge of the Special Events Division, Traffic Division, and Reserve Program. In March of 2021, Sebring was assigned as a Patrol Captain. 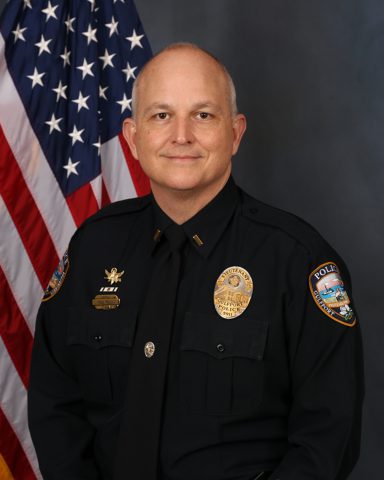